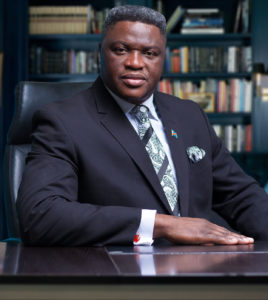 Ambassador Tshibangu Mukumbay PhD was born on the 12th day of April, 1966 in Kinshasa, Democratic Republic of Congo. He has sojourned in many countries such as Ivory Coast, Switzerland and now resides both in the United Kingdom (23 years) and the Democratic Republic of Congo. He is an independent business consultant in the United Kingdom. He brings investors and business opportunities to Africa. He helps to create teams of governmental officials to bring to life dormant projects in Africa by creating necessary contact with investors. Part of his experience is organizing international investors to visit project locations in the Congo DR (South Kivu, Kinshasa, Kasai-Oriental, Maniema, Bas-Congo and Mpweto in Katanga). He is a lead negotiator with private investors to tackle projects in mining, road construction, environmental impact assessment and instigating project to effect the most convicting burden – “Building and Promoting the Land and the people of Africa”. Mr. Mukumbay was the Director of Contracts and Services of Ressource Afrique Ltd, London, UK from 2001 to 2004, where he executed company policies in Congo DR, Zambia and Ghana. His expertise involves trading in high temperature ores (copper, cobalt, coltan, cassiterite, etc…), Gold and Diamond. He traded in heavy industrial equipments and organizing shipping and delivery to the Democratic Republic of Congo, Zambia, Tanzania, Sierra Leone and Ghana. He is very skillful in assessing trade requirements, negotiating contracts and implementing trade links with business partners and government officials in different countries.

He was a primary school teacher in Kinshasa, Democratic Republic of Congo from 1987-1989 and taught in Cote d’Ivoire from 1989 to 1992.
From 1992 to 1995, he was an Assistant Pastor with the Evangelical Revival Church in Fribourg, Switzerland. He is a Charismatic Preacher and he has ministered in UK, USA, Belgium, Malta, Switzerland, Ireland, France, Ghana, South Africa and Congo DR. He is a visionary with insight, a dynamic coach and mentor, a progressive advocator of fairness, equality and eradication of human suffering. He enjoys reading and political debates. He is good communicator with a natural skill for diplomacy, negotiating in business and conflict resolution. He loves football and karate. He likes to take risks, challenges, traveling and reaching the forgotten ones such as the Pygmies in DR Congo. He led a team of artisanal miners in Mpweto/Katanga’s province digging copper and another team of artisanal miners in Bakua Tshimuna/Kasai-Oriental’s province digging Diamond.

He also has done various petit jobs at Post –Office, factory, hospital, prison, university, military barrack, hotel, foods related and companies. At the heart of all his activities is the desire to serve others. That makes him a mission driven Man. Since the inception of the UPA, Dr Mukumbay and his executive team have been very active in preparation for the leadership by traveling to different countries and visiting companies, industries, factories and manufacturers to acquire experience in various governmental sectors so that they can implement the UPA’s vision of “Build and Promote the Land”. Part of the process of preparation is meeting with political leaders, businessmen, Journalists, religious leaders, Human rights activists, nation builders and many more. Click Here For Comprehensive List

“The one God has chosen does not fight for a position, instead he prepares himself; because God will always position him in due time”.