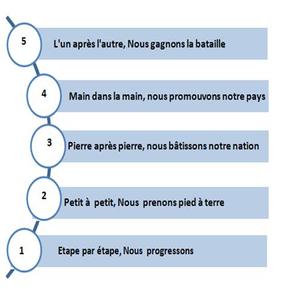 Introduction
History has revealed us that it was ordinary people like you and me who have influenced our world (cultures, societies and communities).
Every century has its own history. Our human history has been marked by challenges and obstacles which have led us to find alternative ways of survival, to circumvent and even better, not just to overcome but to convert challenges and obstacles into opportunities.
Ideologies have always been a preferred tool with the principles serving to unify and integrate particular steps into a consistent course to popularize and convey clear concepts that are meant to meet the expectations of the population and to respond to their interests.
Thus, by its definition, an ideology has been and remains a body of ideas, thoughts, opinions, and beliefs shared within a group of people, by a social class or in a particular historical period. A good ideology must therefore respond to the contextual circumstances, as well as to the community’s social needs since Man is both of these at the same time: The author and the beneficiary of his own ideas.
In order to benefit from the merit of political support, an individual is called to make efforts to adapt his lifestyle to the accurate circumstances, events and environment – since politics is dynamic and ever evolving.
Union du Peuple d’Avenir, UPA, is a political movement which was established by the ordinary Diaspora Congolese: UPA is represented in DRC, Africa, and we also operate, since June 2009, in the western world with a headquarters in Great Britain. The movement emerged in response to the cries of suffering, agony and despair rising up from our country the Democratic Republic of Congo, where the Congolese people are facing economic, social and political stakes which threaten our national sovereignty and territorial integrity.
Therefore, UPA takes on the task and makes it its duty to bring fundamental change through our ideology; thanks to our political leader’s proficient sense, who is determined to give UPA the immediate scale we need in order to reach our final goal: To take a leadership role in the DRC and to not only improve the political situationbut also the economic and the social.